A new Mercy For Animals undercover investigation, which just broke on Good Morning America, and will be featured this evening on ABC World News Tonight with Diane Sawyer and then profiled on 20/20, gives a never before seen look inside a McDonald's egg supplier - exposing the fast-food giant's secret ingredient: shocking cruelty to animals.
Hidden-camera footage, taken at Sparboe Egg Farm facilities in Iowa, Minnesota and Colorado, reveals:

Hens crammed into filthy wire cages with less space for each bird than a standard-sized sheet of paper to live her entire miserable life, unable to fully stretch her wings or engage in most other natural behaviors

Workers burning off the beaks of young chicks without any painkillers and callously throwing them into cages, some missing the cage doors and hitting the floor

Veterinarians and animal welfare experts confirm what common sense already tells us: Egg-laying hens, like all animals, should be given the freedom to walk, stretch their limbs, turn around and engage in natural behaviors. Yet, this McDonald's supplier deprives hens of even these most basic freedoms.

Barren battery cages are so cruel that the entire European Union and the states of California and Michigan have banned their use. Additionally, leading food retailers, such as Whole Foods, Hellmann's, Wolfgang Puck and Subway, and hundreds of colleges and universities refuse to use or sell eggs from hens subjected to the inherent abuses of battery cages. 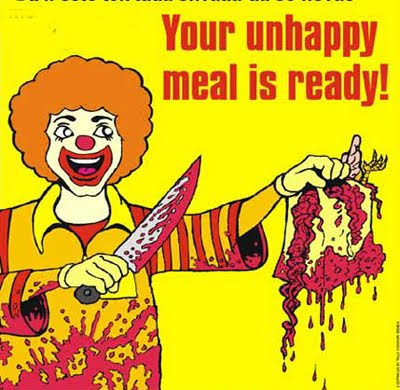 Sadly, not a single federal law currently provides any protection to birds at the hatchery, on the factory farm, or during slaughter. Further, most states - including those in which this investigation was conducted - have sweeping exemptions for farmed animals, which allow abuses to run rampant without prosecution.

As the largest egg purchaser in the United States, McDonald's has enormous power in effecting improved standards of care for egg-laying hens. Click here to sign MFA's petition urging the fast-food chain to uncage hens.

While McDonald's has the moral obligation and purchasing power to lessen the cruelty suffered by the millions of hens who are abused and exploited to produce eggs for its restaurants, consumers also hold enormous power of their own in preventing animal abuse by adopting a compassionate vegan diet.

Click here to make a tax-deductible donation in support of MFA's vital work on behalf of abused and neglected farmed animals.

WATCH THE VIDEO - IF YOU HAVE THE STOMACH FOR IT. It's Sickening.

Posted by Miniature Yorkie at 10:29 AM