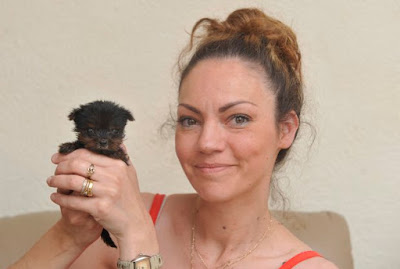 This is seven-week-old Tim.
He’s Britain’s smallest puppy, standing at the same size of a can of beans.


When he was born, he weighed just 2.5oz and wasn’t breathing – so owner Andrea McGowan had to try and revive him with a towel.
It’s now thought that Tim may be suffering from chondrodysplasia (canine dwarfism), but a proper diagnosis won’t be able to be made until he’s 18 months old.

He now weighs 9oz and while his siblings are all going to be rehomed when they’ve finished nursing with their mum Dolly, Tim going to be staying put.