How Much Would You Pay to Replace Your Dog? 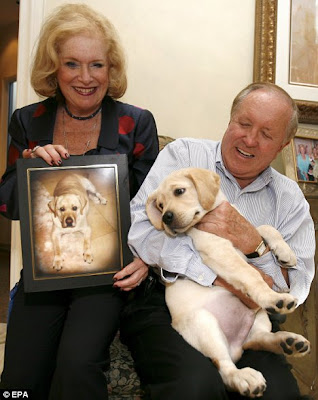 Would you pay $150,000 to duplicate
your dog??
First, who has that kind of cash to just throw around?!
After all, cloned animals or people are not the real thing, no matter how much they look like the source material. Nothing can't replace the original. But even if they were able to clone them complete with memory and personality, aren't there enough amazing dogs in the world to adopt?
Edgar and Nina Otto—Florida   - who have nine other dogs, 10 cats, six sheep and four parrots in West Boca (no kidding)—thought otherwise. That's why they paid that much cash to clone Lancelot—their beloved Labrador—who died from cancer. A company called BioArts International—partnering with South Korean researcher Dr Hwang Woo-suk—created Lancelot Encore, which is the actual name of Lancelot 2.0.
Or better said, Lancelot 1.0 Remastered.
Woo-suk took the genetic material from the original Lancelot—which was extracted when the couple learnt he had cancer—and replaced the genetic material of an egg from a Korean breed similar to the Labrador. After implanting it into a surrogate mother, the cloned Lancelot was born. After that, he was shipped to Miami International, where he became the first single-birth commercial dog clone ever in the United States, according to his parents.
According to Edgard and Nina, he's exactly like the real thing!
Posted by Miniature Yorkie at 9:47 AM 1 comment: 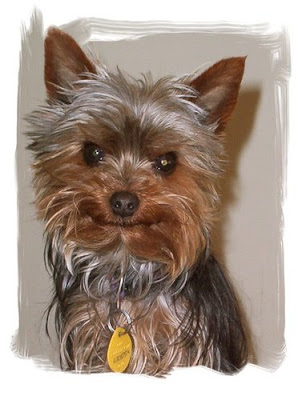 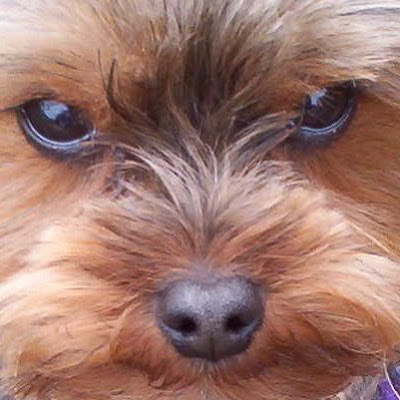 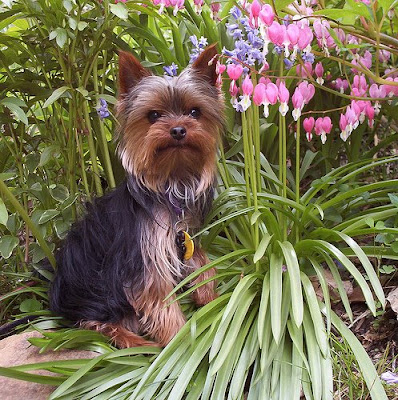 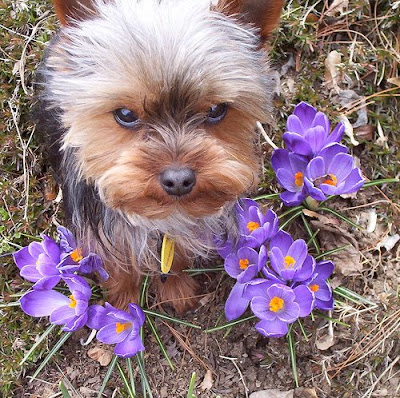 You have got to love the Internet!
It connects us all together!
25 years ago, it was next to impossible
to reach out to others with similar interests.

I was on FLICKR the other day and discovered
several groups for Yorkies! And all these great photos
shot by Janice from the
NorthEastern Yorkie Rescue / Rescue Me!

They have SO MANY Yorkies that need a
good caring home. Rescue Me is a 501c3 non-profit organization
dedicated to ensuring the safety and well-being of the
Yorkshire Terrier breed. "We are a small group of rescue
buddies who came to know one another through one
common interest - saving the lives of dogs. "

If you are considering a Yorkie, PLEASE
consider a rescue. While it is hard to find a "puppy" to adopt,
there are MANY dogs that are young.
Yorkies can live to be 15 or even 20!

There are nearly 2 dozen ADORABLE Yorkies
waiting right now at this rescue alone.
They primarily adopt to MD, PA, NJ, DE
and parts of NY, CT and VA.

(You can also go to PetFinder and look
browse shelters and rescues by state.)

Visit Janice on YouTube also!
Lots of great videos that will melt your heart! 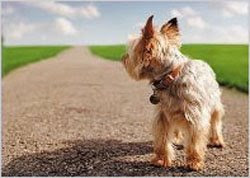 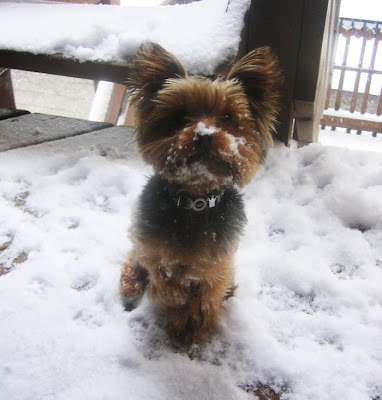 As many of you know, I had my 1 year
birthday this past fall. So this was really my first winter
to experience snow in Chicago!

WOW! And did we get the snow!
I love playing in it when it's fluffy and light -
but my dad has a very hard taking my picture...
I don't like to sit still! 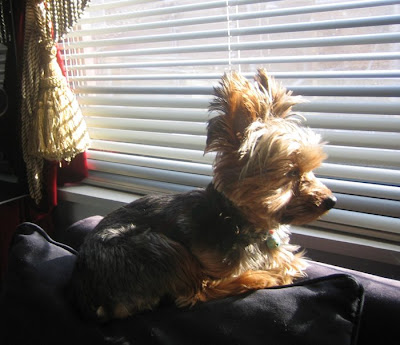 I DO like laying in the sun however
and gazing out the window at birds
and squirrels going by!
And I LOVE the beach -
can't wait till it warms up to go to Hollywood Beach!
Posted by Miniature Yorkie at 1:59 PM No comments:

GABBY - Rescue Yorkie Hits You Tube With A Song! 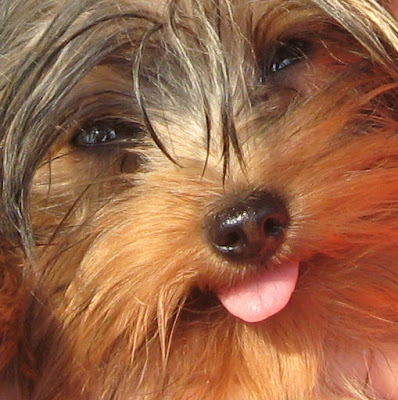 Tina Ann Byers is proud mom of 4 Yorkie Rescues!
And her baby GABBY (11 months old) now has a song and video
on YOU TUBE!
Baby Gabby, just 2.98 pounds and 11 months old,
was surrendered to Rescue suffering from multiple internal
birth defects. Despite four major surgeries in the last
five months, Gabby still finds Time to Rock in her new
MUSIC VIDEO set to a techno-funk beat! Gabby is Bright
and Beautiful and filled with Love!
Too cute!!
Read more about Tina and her Yorkies!
Posted by Miniature Yorkie at 3:32 PM No comments:

Neglected Matted Yorkie in the UK 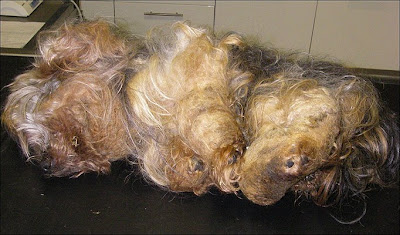 This is SO SAD.
How can anyone, let their dog, get to this state?
The UK SUN reported
THIS neglected Yorkshire terrier had such a matted coat
that it was impossible to tell one end of the dog from the other.
His owner, who treated her pet - called Stumpy -
appallingly for at least six months was jailed for 12
weeks and banned from keeping animals for life.
Annette Antonia, 51, of Brighton, East Sussex,
pleaded guilty to causing unnecessary suffering to
the 19-year-old animal at Brighton Magistrates' Court.
Keep your pet combed.
Don't lets mats form, and if they
do, gently remove them before they
become an issue.
Posted by Miniature Yorkie at 12:33 PM 4 comments: 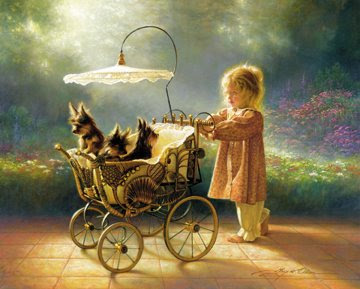 (Another Pet Smart Tragedy - sent in this week...)

It all started when we took him into PetSmart at about 2:30 p.m to get him groomed, a lady took him and told me and my family to come back at 7:00. I didn't want to leave him that long but my mother Laura reassured me they were "PROFESSIONALS", we left Oliver and went out to eat.... About 3 hours later they called back and told my mom that Oliver wasn't acting right, so we rushed over.

When we got to the Grooming section of PetSmart I took Oliver and cried my eyes out, the lady who worked there said that everything would be okay, and to drive him right home. She said he was just tired, but I could tell something was wrong because normally he licks my face all over. When we got to the car I told my mom to take him to the vet immediatley because he was not breathing right and he wasn't moving. The first vets office was closed so we took him to the animal hospital on Sterling.

When we took him in, the Doctors said something was seriously wrong. They told us that his gums were pure white, he was missing a tooth, and his lungs were being filled with a bloody fluid, so he couldn't breath. There had been some kind of trama to the chest that had happened within the last few hours, so they took a long tube to help him breath and cough up the blood. I coudn't stand the fact that my little doggy was in pain so I just sat there crying over my cousin, Willie's shoulder.

After we were at the hospital for about an Hour and a Half I went home with my father, Victor.When I finally arrived at my dad's house he got a call from the vet saying that Oliver passed away. We were just getting out of the car when we got the call. So my dad had everyone go inside except me, he sat on the grass and held me. He didnt even have to tell me my dear dog was dead. I cried so much, and so did everyone else.

Apparantley the groomers at PetSmart hurt Oliver's 4 month old body internally, and he was either dropped on the side of the tub or had fallen off the grooming counters or had been squeezed too tight. Oliver died at 7:56 p.m. and I will never forget that.

Oliver died for a reason, and the reason was to help all of the other people pets, I learned very important things from him. I think Oliver knew it was his time to leave because before he went into the Emergency Room he gave me a kiss on my face like he did every day.

I am an 11 year old animal activist, My name is Summer, I hope you tell your people my story and I hope you tell me any of your animal stories so we can all make a difference.
Posted by Miniature Yorkie at 9:14 AM 1 comment: