COCOA SHELL MULCH CAN BE TOXIC TO DOGS AND CATS 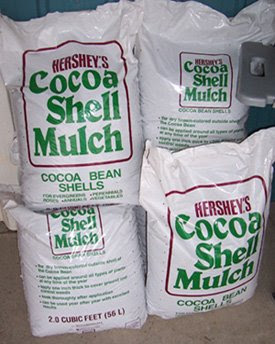 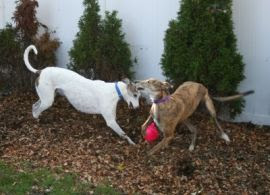 Every Spring, emails start circulating making claims that cocoa mulch, which contains the chemical theobromine, can be lethal to dogs and cats.
This is NOT an Urban Myth, and while only a few reported cases have ever been reported, the warning should not be taken lightly.

"Over the weekend the doting owner of two young lab mixes purchased Cocoa Mulch from Target to use in their garden. They loved the way it smelled and it was advertised to keep cats away from their garden. Their dog Calypso decided that the mulch smelled good enough to eat and devoured a large helping. She vomited a few times which was typical when she eats something new but wasn't acting lethargic in any way. The next day, Mom woke up and took Calypso out for her morning walk .
Half way through the walk, she had a seizure and died instantly."
Although the mulch had NO warnings printed on the label, upon further investigation on the company's website, this product is HIGHLY toxic to dogs and cats.
Cocoa Mulch is manufactured by Hershey's, and they claim that 'It is true that studies have shown that 50% of the dogs that eat Cocoa Mulch can suffer physical harm to a variety of degrees (depending on each individual dog). However, 98% of all dogs won't eat it.'

This Snopes site gives the following information:
Cocoa Mulch, which is sold by Home Depot, Target, Foreman's Garden Supply and other Garden supply stores, contains a lethal ingredient called ' Theobromine'. It is lethal to dogs and cats. It smells like chocolate and it really attracts dogs. They will ingest this stuff and die. Several deaths already occurred in the last 2-3 weeks. Theobromine is in all chocolate, especially dark or baker's chocolate which is toxic to dogs. Cocoa bean shells contain potentially toxic quantities of th eobromine, a xanthine compound similar in effects to caffeine and theophylline. A dog that ingested a lethal quantity of garden mulch made from cacao bean shells developed severe convulsions and died 17 hours later. Analysis of the stomach contents and the ingested cacao bean shells revealed the presence of lethal amounts of theobromine. "
Posted by Miniature Yorkie at 9:11 AM 1 comment: 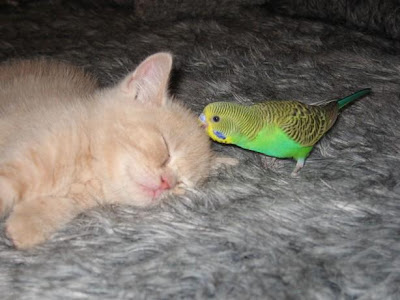 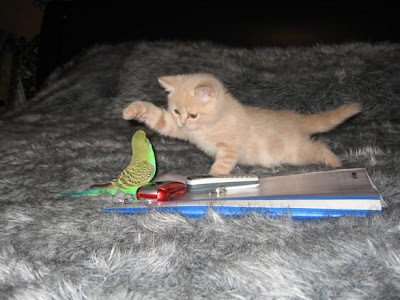 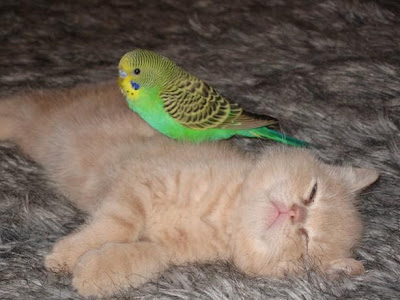 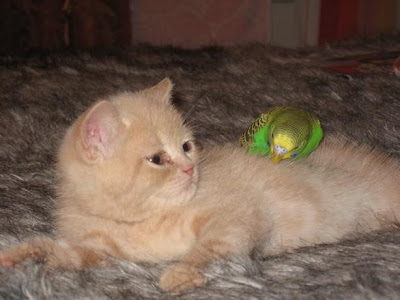 Someone sent these photos today of a kitten and a parakeet playing
together! How cute is that?!
Our cat was 12 when Little Trixie came along.
The Yorkie ADORES the cat and wants to play so badly,
but the cat has always ran from her. A couple months ago, the cat
allowed Trixie to catch her. And now the cat is amused by Trixie
and will sometimes play with her.
Hopefully, as Trixie calms down a bit, I hope they will come to love each other
and sleep together like best buddies! 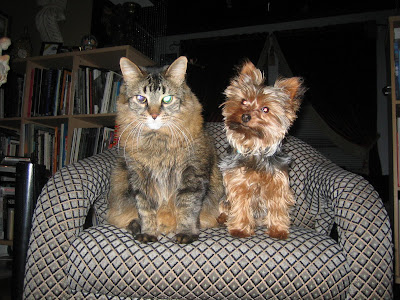 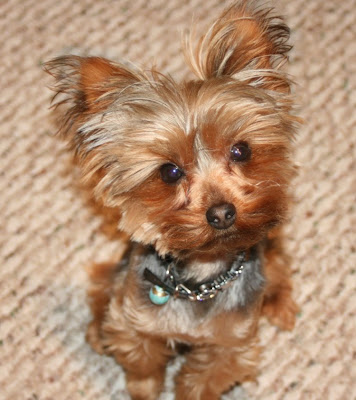 Everyone’s heard a zany pampered-pet story: The dog who only eats home-delivered organic meals, the cat who gets an $18,000 kidney transplants, the pet-sitter who draws a six-figure salary thanks to a neighborhood full of obsessed pet owners. But what does all of this mean, and why is it happening now? Americans spend over $40 billion a year on pets, twice what they did a decade earlier. But the dollars are only one small part of the vast changes in America’s pet kingdom: Dogs have moved from backyard doghouses to their owners’ beds; veterinary practices have evolved from neutering and de-worming factories to corporate medical chains that offer arthroscopic surgeries and prescribe animal antidepressants; simple tennis-ball chew toys have given way to high-tech learning gadgets that promise to entertain a nation of latch-key pets. Man’s best friend has become America’s ersatz child. 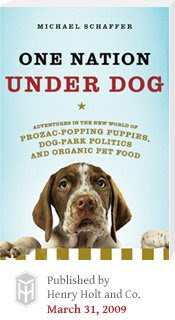 One Nation Under Dog is a voyage through this new world of American pet-keeping—the absurd, the touching, the horrifying, and the comic. I visited with a Chihuahua social networking group in New York, reported on pitched political battles over dog-friendly laws in San Francisco, watched lawyers wrangle over pet lawsuits in Chicago and sat in on pet-loss bereavement sessions in Philadelphia. It turns out the pet boom is about more than plain old over-the-top consumerism. Take a peek at how your pet’s life has changed and you’ll find the modern history of our society—one that covers everything from our ideas about family to our growing social stratification to our long commutes to our endless technological wizardry. Not to mention culture wars, nutritional neuroses, and the rise of globalism.
And, okay, some over-the-top consumerism, too.
One Nation Under Dog shows just how contemporary pets explain contemporary America. And with tail-wagging guides like Jade the Rottweiler, Ben the Beagle, and Murphy the Saint Bernard, the journey through modern society is also a lot of fun.
Author Michael Schaffer has a great website I recommend everyone to visit, there you'll find a link to purchase his book, "One Nation Under Dog,"
read his own blog, or post your own pet story.
You can even upload a picture of your pet
and share it with the world.
http://www.michaelschaffer.net/
One Nation Under Dog facebook page

Posted by Miniature Yorkie at 1:41 PM No comments:

Giving Your Dog or Cat Wheat Chex for Fiber 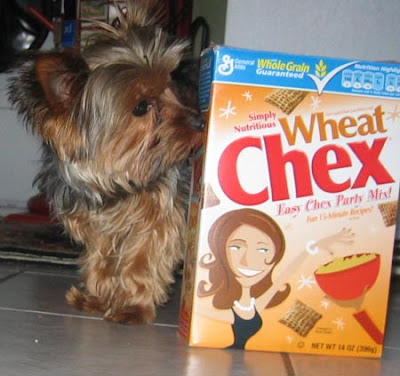 Last year, our cat was having issues with her glands not expressing properly.
We took her to vet, who charged us $150.
One month later, same problem. But not as severe. $100.
The next month, we took her in before the problem occured and paid $35. And we did the same for 2 months following. Cha-Ching. Cha-Ching. We asked the vet, what we could do? The vet offered no real answers. She said if we didn't want to bring the cat in every month, there was a surgey for $1500 they could perform!

A few weeks later I met a vet in a social setting who was visiting from another country. He suggested giving the cat some wheat chex to her diet - he said the tiny amount of fiber should keep her glans fine. And guess what? It worked! So now she gets a few little wheat chex every day and she loves them! Why didn't my vet suggest this simple soultion?
Because most doctors and vets, I believe, are all about making money. Why should they suggest a do-it-yourself fix for a couple dollars, when they can make money off you?!

Anyway, fast foward 1 year. We got Trixie! She loves Wheat Chex too, and keeps snatching them from the cat's bowl. So now she too, gets a few of the little treats each day in her food.
Both animals have had no problems and enjoy them!
Posted by Miniature Yorkie at 10:09 AM 2 comments: