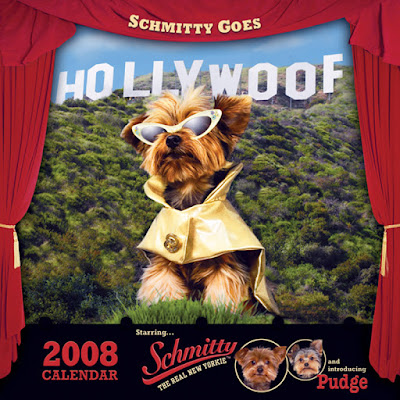 Elly McGuire and her yorkie Schmitty were deeply touched by 911.

It all started because every day Schmitty would pass by Ladder Co. #25 on her way to Central Park to run and play. The firehouse was a 1/2 block away from where she lived. The firemen always petted Schmitty and gave her treats. One day, some of the firemen were not there anymore. Instead there were all these flowers and candles in front of the station and a lot of people just staring and crying and hugging each other.

Schmitty was so sad. She just couldn't sit still. She's a terrier, remember? Schmitty just had to do something! She couldn't give blood and was too small to try and help in the "big dog" rescue efforts. Schmity knew she could make people smile, even through their tears. So, she went to a studio near Union Square and posed for some pictures . . . some patriotic, some sentimental, and some just plain silly. A very creative friend, David, who works for an ad agency in Boston, helped put together some greeting cards from the fun pictures. Another friend, Chad from Los Angeles, helped design Schmitty's website. All the profits from her cards went to the Uniformed Firefighters Association Scholarship Fund. 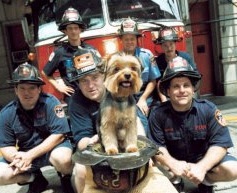 Schmitty's giving back has snowballed into new projects and products. And a portion of the proceeds from Schmitty's new products including her new line of "New Yorkie" people & pooch apparel goes to her foundation, DOGS WHO CARE

and other charities. DOGS WHO CARE, was created to raise money for animals across the country who were displaced and became homeless by disasters like the 2005 hurricanes and now everyday life. Schmitty and her efforts have been featured on ELLEN, ACCESS HOLLYWOOD and even has a MYSPACE PAGE! 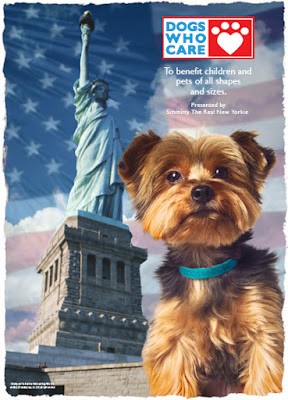 On your MUST-GET list for the people in your life who love movies and pets: the “Schmitty Goes Hollywoof!” 2008 calendar.

Schmitty, and his sidekick Pudge pose for Hollywood film parodies such as “Housebroke Mountain” and “Paws.” Our favorite is “The Hound of Music” — not exactly a Julie Andrews look-alike, but pretty funny.

The calendar is $12.95 and available at Barnes & Noble, and online at SchmittySays . A percentage of the proceeds goes to the Dogs Who Care foundation to aid pets at no-kill shelters around the country. Visit the Web site to see other Schmitty merchandise.

Posted by Miniature Yorkie at 2:44 PM No comments: 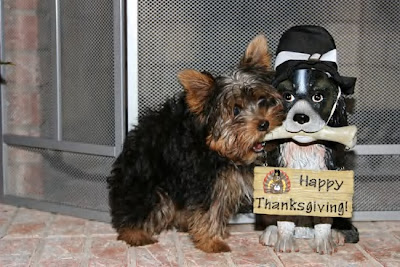 I found this adorable Yorkie Thanksgiving Photo
online and just had to share it!
Best Wishes for a Great Holiday!
xoxoxox
Coco Chanel
yorkie yorkshire terrier miniature yorkshire terrier
Turbo Tagger
Posted by Miniature Yorkie at 10:02 AM No comments:

Yorkie Readers and Fans Around The World 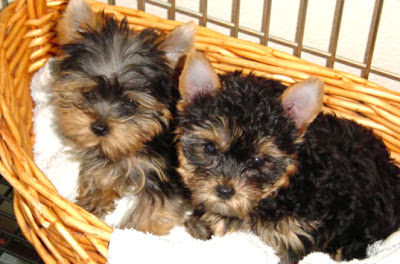 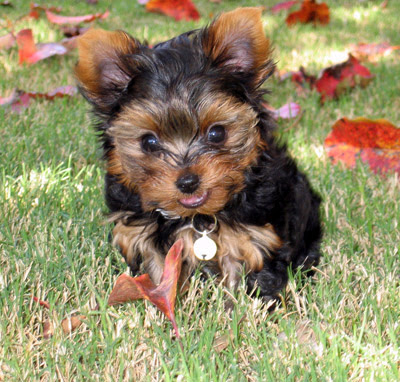 I just have to give a big shout out to all my readers and fans from around the world! - With THANKSGIVING right around the corner next week, I have a lot to be thankful for. As some of you know, I went in for a second cataracts surgery. (I had one done last year, and it was not 100% successful but I can still see , it's just a little blurry eyed...) Unfortunately, this one was not 100% successful either. They could not get the lens on my eye properly. So now I am blurry eyed in both eyes! - But I am thankful I am not totally blind. I still get around pretty good for an old gal of 13!

But I am thankful for my life, my family, and my friends.
These photos were sent in by some readers!
Thanks for sharing those and thanks for readng my little blog! 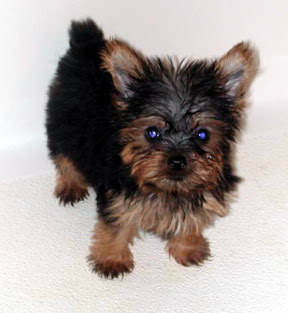 I Hate Giving My Yorkie A Bath 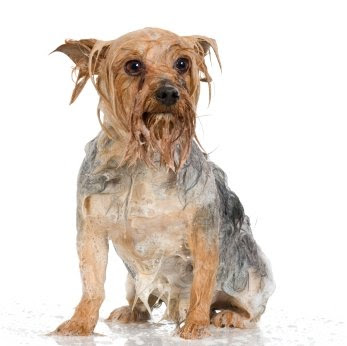 I don't know about you, but I HATE getting a bath! I hate getting wet! When it is raining outside, I certainly do not want to go out and get my feet wet! My daddy tried putting booties on me once, but I wasn't thrilled with that either!
Dogs should be kept on a regular schedule of washing. This is important to prevent skin and odor problems. It is also important to use a dog shampoo because it is formulated for a dog’s skin. Here are some steps to follow when it comes to washing your dog.
The frequency of washing depends on the climate and breed of the dog. Generally speaking dogs should be washed once a week during the summer, once every two to three weeks in the spring and fall, and about once a month in the winter. This schedule is meant for healthy dogs and may vary if your dog has skin or health problems. It is best to check with your veterinarian if this is the case. Always always always rinse the coat well to remove all shampoo residue. Great dog shampoos can be found at PET CARE and Petco.
yorkie
yorkshire terrier
dog bath
Posted by Miniature Yorkie at 7:33 AM 2 comments: From Hampton Roads & the Virginian Pilot -
He's got the look, the vibe, the smile and, darling,
he's so-o-o affordable. More importantly, he's got the
pedigree to go with his L.A. lifestyle, but -
and you knew there had to be a but, didn't you -
but this guy is just a teensy bit unemployed right now.
His name is Rock, but, in the interest of accuracy,
this Yorkshire terrier is more of a Pebble.
He weighs 4 pounds, which is just perfect for
his career in front of the camera. Rock is a fashion model.
That's him you see in the Jeans & Clothes
(they're Swedish) advertisements, being toted
in a shoulder bag by a leggy model. He's also been
in a music video with the English singer
Chicane ("Come Tomorrow"), but his second
video opportunity, with the Jonas Brothers,
was derailed by his move to Virginia.
Producer Clark Moffat, who just loves to cast
Rock because of the cute factor - yes, that's exactly
what he said - described the first fashion campaign
as young and hip Hollywood, "the kind of clothes
celebrities and the trendy would wear every day."
So in the casting call, if you can believe that something
as cute as Rock would just walk in off the street, his
friendly face and beautiful coat made him ideal.
Rock is very patient and calm and he smiles
with these little tiny teeth showing and he pricks
his big ears forward to listen and he can look up,
yes, right on cue. The producer calls
him "the perfect L.A. accoutrement."
But Rock's not in L.A. anymore; he's in Virginia Beach.
His owner, Greg Carr, just got a four-year medical
residency in Hampton Roads, so Rock is, shall
we say, unbusy. The thousands he made as
a model? No longer rolling into the bank.
He's the most available male you can meet right
now, darling, so if you need a pocket pup for just
anything decent in the modeling line,
have your people contact his people!
Posted by Miniature Yorkie at 8:32 AM No comments: