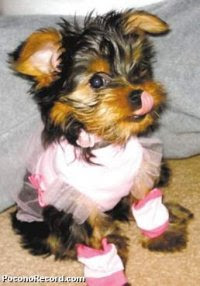 Chicken jerky treats may be to blame for dozens of new reports of mysterious illnesses and some deaths in dogs, prompting a renewed warning for pet owners by the Food and Drug Administration.

At least 70 dogs have been sickened so far this year after reportedly eating chicken jerky products imported from China, (as many products are, these days) FDA officials said. That’s up from 54 reports of illness in 2010. Some of the dogs have died, according to the anecdotal reports from pet owners and veterinarians. - But sadly, the report does not mention any brand names.

We have given our little Trixie DOGSWELL, Happy Hips Chicken Breast for 3 years now - with no issues.

The bag says made with cage free chicken, no hormones, no antibiotics, no fillers and no byproducts. But who knows ...is this really regulated?

I called Dogswell for a comment - a spokesperson for the company said they were aware of the article - but promise, "their products are safe and tested by third party labs in the US - to make sure their products are safe and the ingredients are what they claim they say to be - they also conduct unannounced factory visits in China, to make the facility is up to FDA standards. "

Dogswell have never been involved in any recalls or unsatisfactory reports.

Posted by Miniature Yorkie at 12:18 PM

Fofa only eat Happy Hips Chicken Breast too, for over a year, very small portion, a big peace can cause diarria, she is ok and she really love this treat. Thank goodness our babys are ok, I'm so relive. Thank you so much for sharing this information.

Gosh yes, I just give her tiny pieces. A bag lasts several months.