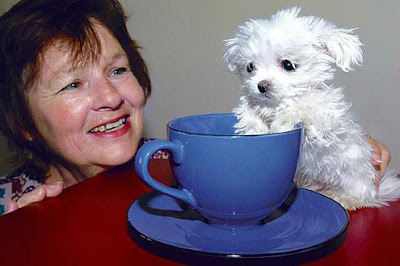 There was a time when being the runt of the litter was considered a bad thing. (Wilbur, the pig co-star of the title spider character in "Charlotte's Web," was almost killed for being a runt, as any children's literature fan will remember.) But nowadays, tiny dogs are fashionable -- as evidenced by the hotly contested Guinness World Records for smallest dog by height and smallest dog by length.
Scooter, above, is a 6-month-old Maltese whose owner, Cheryl McKnight of New Zealand, believes will one day hold the title of smallest dog by height. Scooter is just over 3 inches tall, measured from his feet to the top of his shoulder blade. Although he's still a puppy, McKnight says he hasn't grown at all since he was 2 months old, and she believes he won't grow any taller -- certainly no taller than the current recordholder, an American Chihuahua.
These tiny dogs are unquestionably cute -- but does cute come with a price? The increase in popularity of "teacup" dogs -- extra-small poodles, Yorkshire terriers, Chihuahuas and the like -- has undoubtedly helped boost profits for puppy mills that churn them out as if they were products on an assembly line.
And what of their health? Scooter "weighs less than a block of butter at 400 grams -- and that is while he is wearing clothes," according to the New Zealand Herald. He wears a brightly-colored sock as a shirt to make him stand out, presumably to prevent the inevitable injury that would result if his owner were to make a wrong step. Tom Thumb "can fit inside a teacup and cannot reach his mum to feed when she is standing up," the Daily Mail reports.
According to Petside.com, as humans breed smaller and smaller dogs, "the dogs' teeth don't keep pace as well and many small breeds are troubled by teeth that are too big for their mouths." Tiny bones can break easily as well -- although it's also true that small dogs, on average, live longer lives than large ones.
We're sure many teacup pups are in fine health and enjoy the attention they get for being cute, traveling about in purses and the like -- still, we can't help but wonder if we're doing them a disservice in the long run by making them just too small for their own good.
READ MORE AT LA TIMES.
Posted by Miniature Yorkie at 9:20 AM

Cut a scrap of black fleece to cowl the tail.