What is wrong with people? I really try to avoid watching the news....I just can not understand how some people can be filled with so much hate and/or cruel intentions.

Gregg was sentenced to eight months in jail, ordered to pay a $1,000 fine, and is barred from contact with animals for three years. Gregg must also receive counseling through a program that specializes in treating individuals involved in animal abuse cases.

During a four-week investigation in April and May, MFA's investigator documented farm workers:

-Violently punching young calves in the face, body slamming them to the ground, and pulling and throwing them by their ears
-Routinely using pitchforks to stab cows in the face, legs and stomach
-Kicking "downed" cows (those too injured to stand) in the face and neck - abuse carried out and encouraged by the farm's owner
-Maliciously beating restrained cows in the face with crowbars - some attacks involving over 40 blows to the head
-Twisting cows' tails until the bones snapped
-Punching cows' udders
-Bragging about stabbing, dragging, shooting, breaking bones, and beating cows and calves to death

After viewing the footage, Dr. Bernard Rollin, Distinguished Professor of Animal Science at Colorado State University, stated: "This is probably the most gratuitous, sustained, sadistic animal abuse I have ever seen. The video depicts calculated, deliberate cruelty, based not on momentary rage but on taking pleasure through causing pain to cows and calves who are defenseless."

Sadly, cruelty to farmed animals in Ohio - no matter how egregious - is classified as a mere misdemeanor. Ohio has some of the weakest animal protection laws in the nation - ranking 43rd out of all 50 states. Further, no federal laws provide protection for farmed animals during their lives on the farm. Such inadequate state laws and the absence of federal laws lead to rampant abuse.

The deplorable conditions uncovered at Conklin Dairy Farms further highlight the reality that animal agriculture cannot be trusted to self-regulate and that meaningful federal and state law must be implemented and strengthened to prevent egregious cruelty to farmed animals.


Although many of the abuses documented at Conklin Dairy Farms are expressions of Gregg's sadistic pathology, numerous MFA undercover investigations at dairy farms, pig farms, egg farms, hatcheries and slaughterhouses have revealed that violence and abuse to farmed animals - whether malicious or institutionalized - run rampant nationwide.

Compassionate consumers can end their direct financial support of farmed animal abuse by rejecting dairy, and other animal products, and adopting a vegan diet . 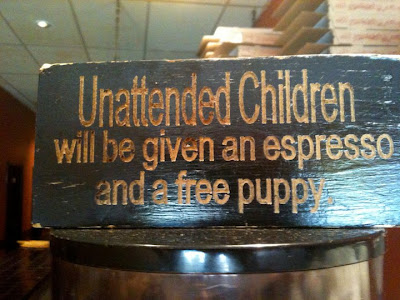 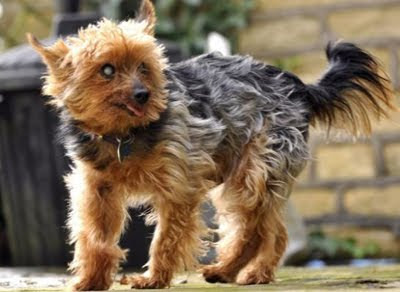 On average, a Yorkie lives between 12 and 15 years.
Meet BILLY!

He may be a venerable 154 years old in dog years, is blind in one eye and only has a few teeth left - but he's still energetic and active, going out for two walks a day and regularly playing with his loving owner, 71-year-old Betty Holdsworth.

He is still able to run around and even jump - despite the fact that he was in a bad state when he was taken in by the local RSPCA before being placed with his new owner.

'His coat was filthy and matted and his nails were so long he couldn't stand up. He was also very underweight and his teeth were rotten,' the RSPCA's Jule Cockroft told the Halifax Courier earlier this month.


And Billy could be in line to claim the record of the world's oldest dog if his age can be proved. The Guiness Book of World Records confirmed that the current holder of the title is a 21-year-old dog.

The world's previous oldest dog, a dachshund terrier cross called Otto, was put to sleep in January this year at the age of 20 years and 11 months after suffering from stomach cancer.

The Best Shampoo for Yorkies and Yorkshire Terriers 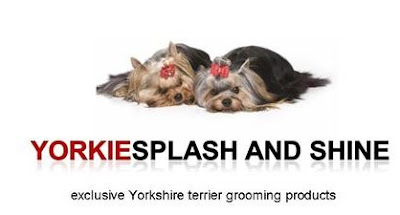 This has been a month of sampling great products!

Last month a reader sent me samples of her special Yorkie Splash and Shine - an exclusive, organic shampoo and conditioner designed just for Yorkies.

In Trixie's 3 short years, I haved tried about 8 different shampoos. And while there have been some very good ones, I have to honestly say, WE LOVE THESE PRODUCTS!

I was skeptical at first, because the shampoo appears very thin and watery. I thought, is this ever going to lather and clean? But it did! Wonderfully. And you know how some shampoo takes a while to rinse out of the hair thoroughly? This rinses out VERY QUICKLY. I was amazed. An 8 ounce bottle is just $9!


Because they are made from mainly organic ingredients, they are safe for the sensitive skin of Yorkies. Yorkie Splash and Yorkie Shine also help promote a healthy, luxurious coat for your Yorkie.

Besides the shampoo there is a great silky conditioner and detangler spray.

Check out YORKIE SHAMPOO - and tell them TRIXIE SENT YOU!
Posted by Miniature Yorkie at 12:36 PM 1 comment: 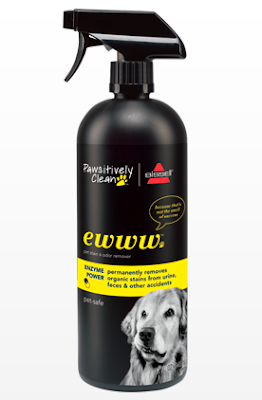 Accidents are bound to happen!
ESPECIALLY with new dogs!

Even though Little Trixie is 3 now, I always keep a cleaning solution handy. Plus I have a cat. And sometimes she throws up or coughs up a hairball. ICK!

I had been buying WHATEVER from the big box pet shops. But now BISSELL has come out with
Bissell Pawsitively Clean Ewww Enzyme-Powered Pet Stain & Odor Remover

They sent us a bottle to try and WE LOVED IT!

•Powerful enzyme-action tackles deep down stains and odors - urine and feces are TOTALLY REMOVED this product.

•Permanently removes organic stains from urine, feces and other accidents

•Safe for use on carpets, upholstery, pet beds, litter boxes or any water-safe surface


This is by far, the best of these types of products, I have tried! 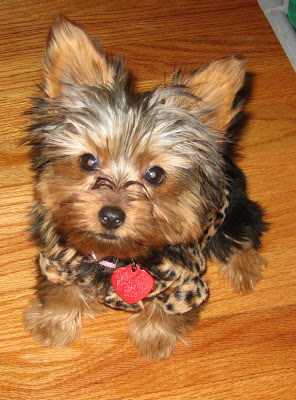 PS - If you have dogs and cats that shed, Bissell makes a special little vacume cleaner, that is wonderful and under $30!

Posted by Miniature Yorkie at 11:56 AM No comments:

The other night we met the founder of Mercy For Animals , Nathan Runkle. Raised on a farm in rural Ohio, Nathan has long had a deep connection with farmed animals and agriculture. After a local farmed animal abuse case, involving a piglet slammed head first into a concrete floor during an agriculture project at a nearby high school, Nathan founded Mercy For Animals to give “food” animals a much needed advocate in his local community.


Since founding Mercy For Animals a decade ago, Nathan has overseen the organization's growth into a leading national force for the respectful and compassionate treatment of farmed animals. A grassroots organizer and coordinator for many years, Nathan has spearheaded hundreds of demonstrations and outreach events across the country – ranging from protests outside pork and egg producer conventions to parade marches, educational exhibits, and more.

A nationally recognized speaker on animal advocacy, grassroots activism, and factory farming, Nathan has spoken at colleges, forums, and conferences from coast-to-coast.

On the Mercy for Animals Blog this month, they interview author Melanie Joy and discuss her book Why We Love Dogs, Eat Pigs, and Wear Cows: An Introduction to Carnism

In her book, the term "carnism" is used in the discussion of why our society thinks cows, pigs and chickens make for good eating, while rats, puppies and parrots make us queasy.

Melanie says, "I wrote Why We Love Dogs... for both carnists and veg*ns. I wrote the book for carnists to help them understand not simply why they shouldn't eat animals, but why they do eat animals, and to help them feel invited into the conversation, rather than preached at. I wrote the book for veg*ns to help them feel more grounded in, and better able to articulate, their choices; to understand the carnists in their lives so they could communicate more effectively; and to understand the system they're working to transform."

It's great reading and makes you stop and think. Check it out!

And also stop by Mercy For Animals on Facebook !