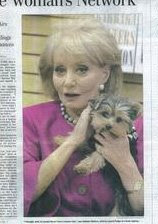 OK, so this one takes the cake . . . whatever that means.
Me and my sister, Pudge were at B&N for a book signing
for Barbara Walters. My 2 legged folks were there to
get her fab new book, "Auditions" signed.

Pudge and I were there to give Ms. W. one of our
BARK THE VOTE postcards for her dog.
Well, not only did I have a chance to give Ms . Barbara our postcard,
but she gushed over us and started hugging Pudge.

Next thing you know - a 2 legged photographer said she
was from the Washington Post and takes all our names
(and a BARK THE VOTE postcard too!).

So, flash forward to the next day -
I'm half snoozing with the TV on "The View" when we
all hear Ms. Walters in playful alpha tones saying
"That was not my dog in the Washington Post picture with me this morning!"
I may be just a five pound pooch, but putting 2 + 2 together
and coming up 4 (I think?) - I knew "that dog" must be our little Pudge!

Get this - the caption under this gigantic picture that took up most of the front page of the WP's Style section says " . . . Barbara Walters with her pooch, Pudge at a book signing." Yikes! That's not Barbara's dog! Hey, Washington Post, do your homework! Arf-Arf !

As big a fan as we are of Barbara Walters - Pudge is not her dog and loves living with her two legged Mom & Dad and me very much. Pudge even wrote Ms. W. a note suggesting she have Pudge on "The View" to "right the wrong" of the Washington Post and tell her dog, Cha-Cha face-to-face to go to Bark the Vote to "vote", send in her Patriotic pooch pics . . .
even get her 2 legged friends to register to vote.

We also wrote the Washington Post (boy, are my paws tired!)
to try and get a correction and "bark" about BARK THE VOTE too.
But no word of a play date so far from Ms. Walters or The Washington Post.

Posted by Miniature Yorkie at 9:11 AM 2 comments:

Bark The Vote with Schmitty - The Real New Yorkie 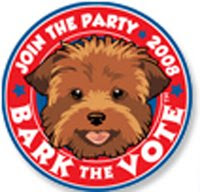 Schmitty - The Real New Yorkie is back in the news!

A poll is not just a place to pee!

In an effort to raise voting awareness Schmitty says,

Let's walk our 2 legged companions to the polls this November and help them exercise their right to vote. Let our human friends know - One vote can make a difference. Together we can take a "bite" out of voter apathy. Just imagine if all the pet lovin' humans voted - what a kinder, friendlier place this would be. More votes - more treats!

Let's join the party and BARK THE VOTE!

100% of the proceeds raised will help

DOGS WHO CARE/dogs in shelters.

Watch the YOU TUBE video and

join Schmitty on MY SPACE. 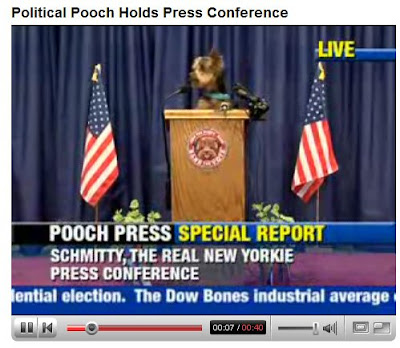 Posted by Miniature Yorkie at 8:53 AM No comments: 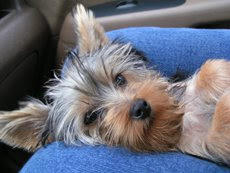 I recently came across Sharda Baker and her Yorkie site!
She offers a great free newsletter
that you can sign up for.

In the current issue, she discuuses the Yorkies
growth cycles during the first year and the
changes that can occur in a Yorkies personality.

Posted by Miniature Yorkie at 10:21 AM No comments: 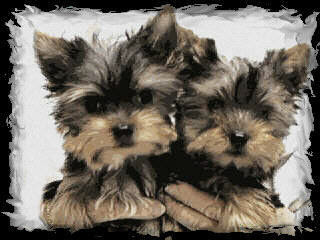 We have gotten some questions recently about
Yorkie clubs. Locally, you may have a MEET UP group
in your city for Yorkies. I go to one here in Chicago
that is lots of fun! It's like a playday!
Also, you may want to check out...

The Yorkshire Terrier Club of America
All club enquiries to-
Barbara Mescan PRESIDENT
Chicago, Ill.
Yorkrescue@aol.com
Phone 1-847-673-6247
Donna Walters
Ottawa, KS
Phone 1-785-242-6129
donnawalters1976@gmail.com
The Yorkshire Terrier Foundation, Inc.
This was founded by The Yorkshire Terrier Club of America
to do research on health issues relating to Yorkies.
A newsletter is published every three months.
A contributions is required to receive newsletter.
$20 for individuals - $40 for families-$50 for businesses
obtainable from the Treasurer: or from the Vice President:
Donald Quinn PO Box 10582 , Rock Hill , SC. 29731-0582

And for a great list of rescue groups
check out NET PETS!
Posted by Miniature Yorkie at 8:54 AM 2 comments:

Discarded cats at a "puppy mill". 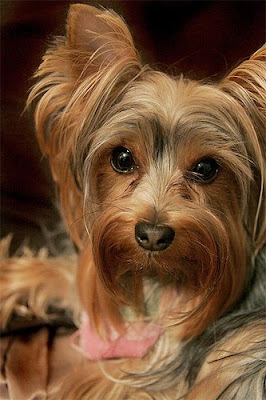 Many of the dogs born in puppy mills end up in pet stores or sold on the Internet.
Which is not illegal. But the puppy mill animals go through an awful life are frequently end up being sickly with a variety of health issues. Yorkies are so popular, many
puppy mills crank this breed out.

Pets enrich our lives in so many ways.
They are always there for us, loyal, nonjudgemental
yet they ask so very little. A clean safe home. Food, water & love.
Help with the fight against animal mills for the sake
of the ones who have no voice... worse yet, no choice.

Learn more about how to avoid buying a puppy mill

dog, and take the pledge to stop puppy mills today.

Posted by Miniature Yorkie at 8:35 AM 4 comments: 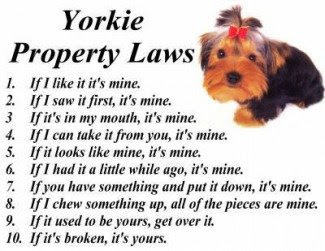 Posted by Miniature Yorkie at 11:05 AM 3 comments: