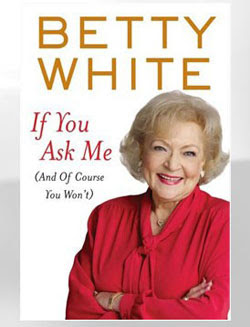 89 year old BETTY WHITE has had an amazing career and just released her 6th book, If You Ask Me: (And of Course You Won't)

From 40's pin up girl to Golden Girl, Betty's illustrious career in television and film spans almost seven decades. AND SHE IS STILL WORKING!


She looks at life through the lens of her time in show business. White shares her thoughts on life's most important topics with her customary humor.

If I didn't feel so well, I might have a different philosophy altogether.

But I don't get depressed as the number climbs. Perhaps because I don't fear death. To some it is such a bête noire that it ruins some of the good time they have left. "

This is Betty White at her best. Wise, funny, irreverent and engaging. Drawing on a lifetime of lessons learned and observations made, she applies her wit and wisdom to a broad range of topics while mixing in her best stories from her extraordinary career.
White is a huge pet enthusiast and animal health advocate who works with a number of animal organizations, including the Los Angeles Zoo Commission, the Morris Animal Foundation, and Actors & Others for Animals. Her interest in animal rights and welfare began in the early 1970s while she was both producing and hosting the syndicated series, The Pet Set, which spotlighted celebrities and their pets.

As of 2009, White is the president emerita of the Morris Animal Foundation, where she has served as a trustee of the organization since 1971. She has been a member of the board of directors of the Greater Los Angeles Zoo Association since 1974.Additionally, she served the zoo association as a Zoo Commissioner for eight years.

In the book, Betty shares stories about some of the animals in her life - including Koko the 37 year old Gorilla and Beethoven and Mauris the Beluga Whales she met in Atlanta.
She also talks about pet adoptions and her work with the Los Angeles Society for the Prevention of Cruelty to Animals.


BUY THE BOOK
If You Ask Me: (And of Course You Won't) 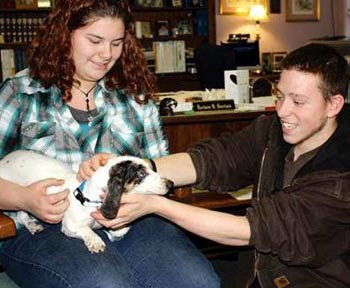 Even though this is a site for Yorkies! I DO associate with other breeds of dogs!

This story is so sweet - A deaf dachshund is getting some expert help learning more sign language after finding a new home at the Missouri School for the Deaf.
A dog named Sparky was born deaf. The breeder said he barked CONSTANTLY and no one wanted him. She was about to put him down. (HOW CRUEL IS THAT?!)
Someone saw an opportunity and got the dog into eight weeks of training with inmates at the South Central Correctional Center. They taught the dog sign language and controlled his barking. They decided that Sparky should live with deaf students.

The superintendent of the Fulton school, Barbara Garrison, jumped at the chance. The students continue adding to the sign language Sparky learned from the inmates. He already knows the signs for "no," "sit," "lay down," "stay," "stop" and "heel."

The brindle-colored dachshund even sleeps with students in the dorms sometimes.

Sophomore Catherine Slinkard of Sullivan asked to keep Sparky overnight first, so he stayed in her dorm one night.

"He was very calm when I had him," Slinkard said through an interpreter.

Then Sparky went over to Michael Miller's dorm. The senior says he fell in love with the little dog. Miller learned quickly that yelling at Sparky did no good. He had to either use sign language or pick the dog up to get his attention. Miller knew Sparky could hear nothing, just like him.

"I feel that because I can communicate with him in signs that it's special," he said through an interpreter.

When Sparky isn't overnighting in the dorms, he sleeps at Garrison's house where she keeps four other dachshunds.

He patters around campus during the day.

"He fits perfectly here," Garrison said, "because these kids hear all the time what they can't do. We try to tell them what they can do."

Prison staff checks in frequently to see how Sparky is doing. The news is all good. Garrison said Sparky teaches responsibility and has the ability to help calm down students with behavior or social problems.

"He likes his new deaf family here," she said.

Posted by Miniature Yorkie at 6:38 AM 3 comments: