Send us pictures of your pets in their Halloween costumes for a chance to win!
Enter the PooPeePads Best Halloween Costume contest!

We can't wait to see your adorable pets!

PooPeePads Wishes You And Your Pets A Happy Halloween! 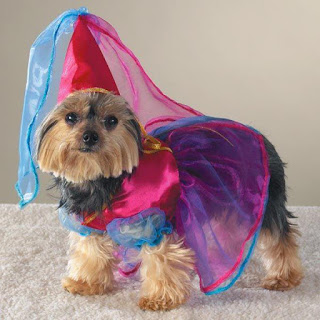 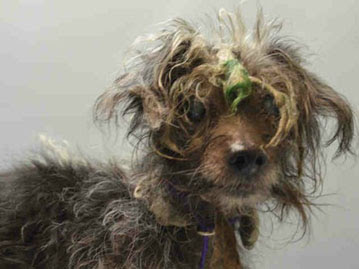 Poor little Mitchell; who could be so cruel?

The ten-year-old blind Yorkshire terrier is so afraid when he was picked up by New York City Animal Care and Control and brought to the Brooklyn shelter this past week.

Some miserable culprit had spray painted little Mitchell green on his face, in his eyes, and on his back soaking right into the skin of his caudal spine. (base of his spine) Mitchell was brought in on October 22, and is due out and ready for rescue on Sunday, October 25.

According to his medical notes, even though he is extremely stressed, Mitchell did allow handling although it is advised to move very slowly as this little guy must have been through more than most animal advocates even want to know. The emaciated, six-pound dog is heavily matted around his legs and face and has extensive dental issues, however no flea infestation or active parasites were noted.

A volunteer writes the following: "Mitchell is a 10 year old Yorkie mix who came in as a stray- matted and emaciated. During Mitchell's medical exam, it was noted that he is also BLIND. This little guy needs some TLC- Can you give him some?" When making inquiries about Mitchell, reference A1055686.