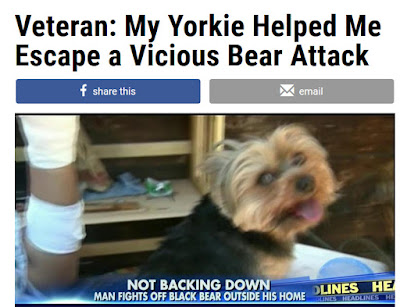 Larry Yepez, 66, said he startled a 200-pound black bear who was rummaging through his trash outside of his California home near Yosemite National Park.

The bear latched onto his arm, and Yepez tried punching him, but the animal wouldn’t let go. Yepez even kicked the bear off of him, but the bear came after him again.

That’s when Yepez’s dog started barking and distracted the bear. Wildlife crews are now looking for the black bear, who fled the scene.
Posted by Miniature Yorkie at 10:23 PM