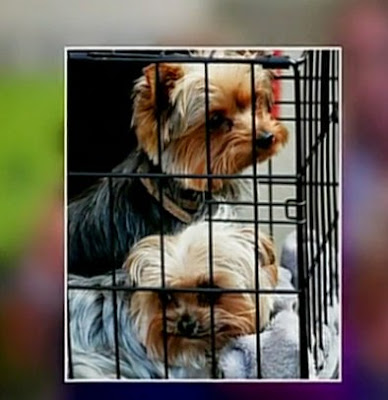 Facing the threat of imminent death, Johnny Depp’s dogs Pistol and Boo fled Australia for the United States on Friday after Australia’s agriculture minister angrily accused the Hollywood actor of sneaking the pups into the country.

A Department of Agriculture officer escorted the Yorkshire terriers from Depp’s home – where they had been temporarily quarantined – to the airport on Friday evening, Agriculture Minister Barnaby Joyce said in a statement. The tiny outlaws promptly boarded a flight to California, just hours before a government-imposed deadline that the dogs leave Australia or be euthanized.

The hastily-arranged departure came after Joyce accused Depp of smuggling the dogs aboard his private jet when he returned to Australia on April 21 to resume filming of the 5th installment in the “Pirates of the Caribbean” movie series at Gold Coast Studios.


Australia has strict quarantine regulations to prevent diseases such as rabies spreading to its shores. Bringing pets into the country involves applying for a permit and a quarantine on arrival of at least 10 days.

The Agriculture Department told Depp and his wife Amber Heard on Wednesday that they had to send Pistol and Boo back to the United States within 72 hours or the animals would be euthanized. And they did.

Posted by Miniature Yorkie at 9:47 AM

Sometimes it seems that certain people are above the law and it is horrible that innocent Yorkies were almost killed because of a human's of ignorance. I always check everything out before traveling with my Yorkie because that is what a responsible adult does. Plus I am a nobody and I don't think I don't have to follow the rules. Plus if I have been to a certain country before I really should know their laws and abide by them. I only felt sorry for the Yorkies and I pray that they are never placed in this position again because they may not be as lucky because of something that is not in their control.

I agree with Kimberly & Snoopy. Why in the world would someone put their pups in that kind of danger. Johnny Depp is no dummy he knows better than that. Why would he try and sneak his Yorkie's in without the proper paperwork. I'm just glad the two little pups were sent back before something really bad happened. I hope that he has learned a valuable lesson and doesn't try and pull that stunt ever again.