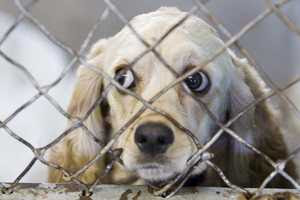 A man sits on a bench in the shade next to a cage holding two gray feral kittens. A few feet away, another man holds onto a leash connected to a big brindle dog. Among the half-dozen animals awaiting their fate is an obviously pregnant Yorkshire terrier mix whose owner is relinquishing her to the shelter.

The animals are among 62 dogs and cats that will be admitted to the Humane Society on a day that also will see 18 pets adopted to new homes and 24 euthanized.

Admissions is the first stop for animals entering the shelter, which takes in more than 14,000 dogs, cats and other small pets a year. It's where the decision process begins on which animals will be offered for adoption and which won't.

Forty-three staff members carry out the Humane Society's mission: caring for animals and finding new homes for them. The shelter also relies on a pool of about 250 volunteers.

The Kansas City Humane Society is a nonprofit organization that receives no government or United Way funding and depends on adoption fees, private donations and fundraisers.

Please spay or neuter your pet and be a responsible pet owner.
Posted by Miniature Yorkie at 12:01 PM No comments:

This Yorkie is a Snappy Dresser! 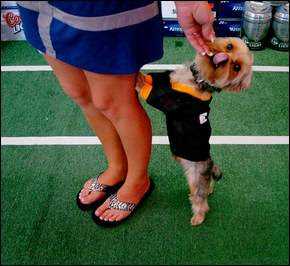 Although he is small in stature,
Hattiesburg, MS, resident Deuce has
tremendous style. Deuce, a 6-pound
Yorkshire terrier, is known for his fashionable
clothing and precious accessories. Deuce's owner,
Amanda Foster, said he has had style since the
moment she picked him up in Mobile, Ala.
"When I got him, we went straight to PetSmart
when we got home and bought him a shirt," Foster said.
Foster's love of fashion for Deuce has only
blossomed over the nine months he has been a member of her family.
Foster said Deuce currently has a large
wardrobe that consists of T-shirts, polo shirts
and a rhinestone collar with a heart-shaped
identification charm dangling from it.
"He gets a lot of compliments on his clothes,"
Foster said. "I think he knows he is wearing
clothes and that people can see him. When he is
dressed up, he likes to be on the counter at the
store so people can see him. When he is
not dressed up, he likes to hide."
Posted by Miniature Yorkie at 9:18 AM 1 comment: 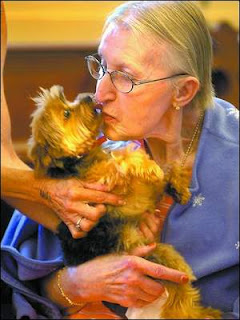 Poindexter, a four and a half pound,
seven year old Yorkshire Terrier,
never took his eyes off of his owner,
Megan Levise, as she worked out at Curves last
Thursday morning. He sat on a red fleece
blanket under a bench and watched every move
Levise made. When others cooed over the cute
puppy, he stayed put, obediently
following the last command.
Dexter is a working animal,
a Heart Service Dog. When Levise says
"stay," Dexter stays until told otherwise.
There is one exception to the rule.
When Levise starts to have difficulty with
her heart or breathing,
Dexter is immediately at her side.
Dexter's training as a Heart Service Dog
began when he was just a tiny one pound
puppy, fitting into the palm of Levise's hand.
He went through the Canine Good Citizen
Test which required him to accomplish such
tasks as walking through a crowd and
behaving properly around another dog.
Dexter is the perfect dog, Levise said,
especially for someone with her particular
disability. First he is easy to pick up and handle.
Second, his hair is hypoallergenic and doesn't
produce the dander that causes allergies.
Third, his small size allows him to travel easier
and be with Levise without being a distraction to others.
Reported by
Jessie Ellis - Michigan
Posted by Miniature Yorkie at 7:37 AM No comments:

Jilli is Back - On Australian TV

showed the famous JILLI doing one of

her card tricks. She is soooo cute!

Posted by Miniature Yorkie at 10:36 AM 3 comments: