ALLEGEDLY - James Crane worked on the 101st floor of Tower 1 of the World Trade Center .. He is blind so he has a golden retriever named Daisy.

After the plane hit 20 stories below, James knew that he was doomed, so he let Daisy go, out of an act of love. She darted away into the darkened hallway.

Choking on the fumes of the jet fuel and the smoke James was just waiting to die. About 30 minutes later, Daisy comes back along with James' boss,
Who Daisy just happened to pick up on floor 112. (?) I thought there were only 110 floors....

On her first run of the building, she leads James, James' boss, and about 300 more people out of the doomed building.

But she wasn't through yet, she knew there were others who were trapped. So, highly against James' wishes she ran back in the building. On her second run, she saved 392 lives. Again she went back in. During this run, the building collapses. James hears about this and falls on his knees into tears.

Against all known odds, Daisy makes it out alive, but this time she is carried by a firefighter. "She led us right to the people, before she got injured" the fireman explained. Her final run saved another 273 lives. She suffered acute smoke inhalation, severe burns on all four paws, and a broken leg, but she saved 967 lives. Daisy is the first civilian Canine to win the Medal of Honor of New York City.

This email circulated right after the tragic 911 day. And it has resurfaced. Try as I might, I have not been able to locate a single published news story mentioning a World Trade Center survivor named James Crane. And though there were indeed many canine heroes who participated in rescue operations at Ground Zero after the September 11 terrorist attack, I could find no golden retriever named Daisy listed among them.

ALL THAT SAID, there were at least four real-life examples of guide dogs escorting their blind owners out of the burning twin towers to safety. Roselle, a Labrador retriever, led Michael Hingson down from the 78th floor of the north tower and to the home of a friend several blocks away. Dorado, also a Labrador, guided Omar Rivera down 70 flights of stairs, an ordeal that lasted over an hour but ended with both man and dog a safe distance from the towers when they collapsed. - also - "Salty" another guide dog, was also awarded the medal for guiding his owner from the WTC. New York Police dog, "Appollo" was another to receive the medal on behalf of Ground Zero Search and Rescue dogs. Although these animal heroes helped to save lives on 9/11, none of them repeatedly returned alone to the building to lead hundreds of people to safety.

Posted by Miniature Yorkie at 9:48 AM 3 comments: 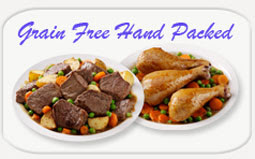 NATURAL, is the keyword here.
Founder Fred Evanger raised champion Great Danes. He was a fervent believer that his dogs' health and the health of their offspring were dependent on wholesome, nutritious dog food - dog food without any preservatives and free of harmful additives. Frustrated with the pet food available to him, Mr. Evanger built our canning factory at his kennels. Almost 70 years later, we know that he was a man ahead of his time.

You know when you are eating a delicious chicken dinner, and poor Fido is sitting there drooling...and you SO want to give him a taste. But you know you shouldn't...you have added salt, pepper and other stuff - that are probably NOT good for your dog. Well you can give him Evangers and it IS GOOD for him. You can even eat it. It's real chicken, real beef, with no additives. Lots of gravy.

100% “Human grade” meat
Free Range, Grass Feed meats, Wild caught Salmon
Hormone and antibiotic free, no steroids, no growth promotions
Animals raised in a human manner
Most meat we get locally that we pickup with our own truck.
No byproduct, fillers, corn, wheat or soy or salt

Posted by Miniature Yorkie at 10:49 AM No comments: 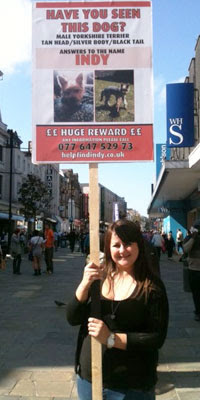 DOG loving Jill Neary has devoted herself to reuniting pooch owners with their lost pets... after turning internet sleuth to track down her own beloved Yorkshire Terrier.

Jill was heartbroken when her dog Indy went missing. And, after a five-week hunt that involved tip-offs and sightings posted on a Facebook page she set up, she was reunited with him.

Now she hopes her story will inspire others never to give up, and also that the website she set up on Facebook will leave a lasting legacy helping to reunite other owners with their dogs.

Even though Indy has now been found Jill’s page www.helpfindindy.co.uk has more than 1,100 fans.

And innovative techniques including sighting maps of any spotted stray dogs and places to upload missing posters have already helped others to track down their pets.