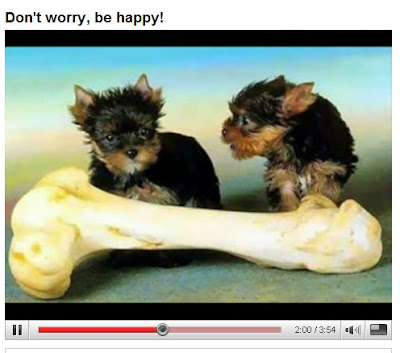 Was having sort of a blue monday
and needed cheering up....
I found this little Video on YOU TUBE...
Hopefully it will brighten your day up!
Give your dog a big too!
Posted by Miniature Yorkie at 6:11 PM 1 comment:

How Well Do You Know Man's Best Friend?? 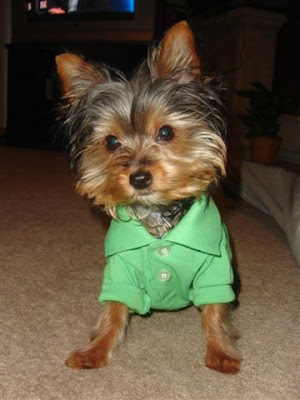 DOGS have been man's best friend for more than
10,000 years, but how the relationship evolved has never been clear.
Our canine friends might be descended from wolves,
but they don't have too much in common with the wild beasts.
But how well do you know our four-legged friends?
Here are some fun facts about our canine companions...
All but two breeds of dogs have pink tongues.
The chow chow and the shar-pei, both have black tongues.

Dalmatian puppies are born pure white,
with their spots developing as they mature.
Basset hounds cannot swim. Their legs are too short
to keep their heavy, long bodies afloat.

Dogs can sniff out cancer by recognising its
signature smell, according to a 2006 study.
The smallest dog in history was a Yorkshire terrier.
At two years of age, fully grown, he was 2.5 inches tall
and 3.75 inches long. He weighed only four ounces.


The world's smartest dogs are thought to be
the border collie, the poodle and the golden retriever.

a recent poll found that 33 per cent of dog owners
admit to talking to their dogs on the phone and
leaving answering machine messages for them while away. 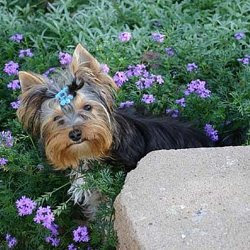 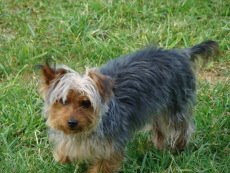 I just hate taking my little Trixie to the groomer or the vet and leaving for any length of time. You just don't know what kind of care they are getting, Luckily, we have someone near us who now comes to the house to groom her and I am there to help.

In Virginia , a man has filed a lawsuit against PetSmart, claiming one of its groomers nearly killed his terrier puppy.

Jeff Dalton, who is an investigator with the Floyd County Sheriff's Office, filed the civil suit in County Circuit Court 2 weeks ago, naming PetSmart and groomer Chris Roop as defendants. Dalton is seeking $175,000 in damages.

According to the suit, Dalton took his Yorkshire terrier puppy, Chester, to the Christiansburg PetSmart to be groomed on Jan. 26. He was asked to return at 9 p.m. to pick up the dog.
He returned instead at 7 p.m. and was told that because of difficulties in grooming Chester, the grooming was incomplete. He was offered a discount.

An employee went to a back room to get Chester for Dalton. "At that time," the lawsuit states, "Chester appeared lifeless and was struggling to breath ."

When Dalton asked for information about Chester's difficulty breathing, he was told that Chester had been very "wiggly" during the grooming and had "finally given up," according to the lawsuit.
Dalton paid for the grooming and carried Chester to his car. Chester immediately began throwing up blood, he said.

Dalton went back inside the store and demanded to see a manager. A manager agreed to call Town & Country Veterinary Clinic, a 24-hour veterinary service. Dalton took Chester there.
According to the lawsuit, Dr. Kelly Burdette at Town & Country told Dalton she wasn't sure Chester would survive.

She found that Chester had received severe pulmonary contusions and significant bruising "which could have only been inflicted by cruel and deliberate force during the grooming," the lawsuit says.

Chester underwent surgeries and survived, "but will continue to suffer stress, anxiety, and a weakened pulmonary function," it reads.
Dalton later questioned the store manager about Chester's treatment. The manager, who is not named in the suit, "stated that its groomers were not adequately trained in the recognition of signs of stress in a dog" and told Dalton that PetSmart would retrain its groomers, according to the lawsuit. ( Remember the case last month, where an untrained groomer left the dog unattended and ended up drowning? )

A spokeswoman for PetSmart said the company doesn't comment on pending litigation.
Dalton said that Chester was 4 months old when the incident happened. Now, the puppy is nearly full-grown at 4 pounds, 7 ounces.

Dalton believes Chester would have died at PetSmart if he hadn't shown up two hours earlier than he was scheduled.
"His eyes were open but he was just lifeless," he said. "It was all he could do to get his breath."
Dalton said the veterinarian had to turn Chester upside down to drain the blood from his lungs.
Chester was kept at the clinic for four days, he said. The dog is doing better now, Dalton said, but coughs a lot and must be sedated to be groomed.

At a well-known and well-respected company such as PetSmart, he said, "they should be trained enough to know that, hey, this is a lot of stress on this little dog."

Posted by Miniature Yorkie at 8:06 AM 20 comments:

Pet Cost Calculator is brought
to you by money.co.uk where you can check out pet insurance uk.

Posted by Miniature Yorkie at 9:59 AM No comments: