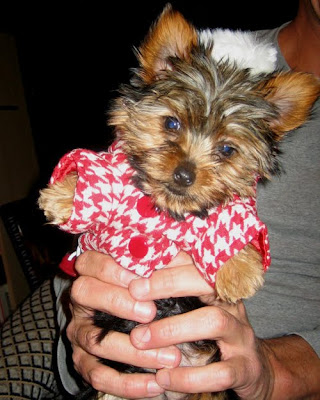 TRIXIE just might be the new spokesdog for the Showboat Casino Hotel in Atlantic City.
If you have Facebook, please VOTE FOR HER!
Posted by Miniature Yorkie at 7:32 AM 7 comments: 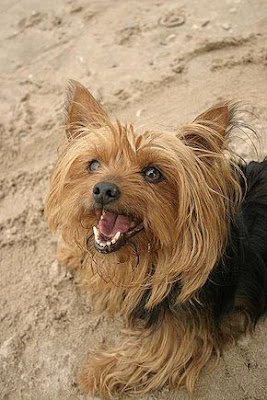 Dogs have always been great, friendly companions, hence the Man’s Best Friend title, but nothing comes close to the valuable help provided by a Yorkshire Terrier named Maisie, (NOT pictured) who recently alerted an owner that his house was up in flames. The canine managed to use initiative to run to the location of the owner and encourage him to come home and find help for the situation.


Last week at approximately 6pm in the evening, Maisie noticed flames and smoke bellowing from a house in Limes Road, (in the UK) . Mr. Whitmore, the owner of the house resides there with some lodgers, as well as his wife and children. At the time of the incident, Mr. Whitmore was in his local sports and social club, before he was greeted by Maisie, smelling of smoke.

Maisie impressed local neighbours after running a total of 350 yards from the burning building to the local sports and social club. Maisie was in the kitchen of the building when the blaze started, which is said to have begun as a result of something being cooked on the hob. When Mr. Whitmore was alerted of the incident, he called fire fighters.

An hour after the beginning of the fire, the fire department put the fire out with the use of breathing equipment. Thankfully, due to the Yorkshire Terrier’s fast reaction, no one was hurt in the process. Although the bottom floor of Mr. Whitmore’s house was badly affected by smoke, it appears that only the kitchen really experienced the majority of damage from flames.

Yorkie to the Rescue!
Posted by Miniature Yorkie at 8:41 AM 1 comment:

Where Are The Yorkie Photos? 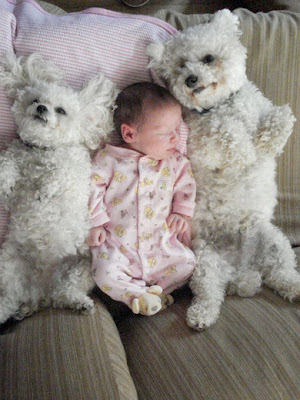 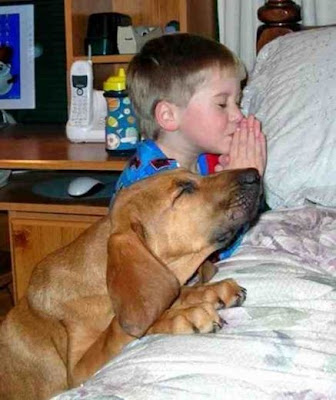 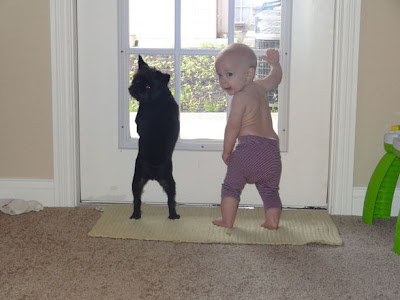 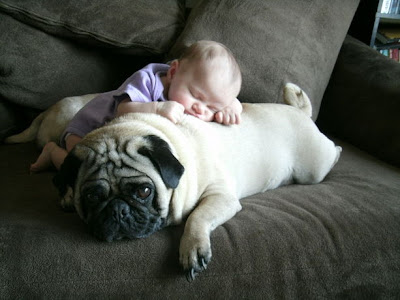 Some readers send us the cutest photos! While I prefer to show Yorkies - I could not resist sharing these!
Posted by Miniature Yorkie at 1:18 PM No comments: 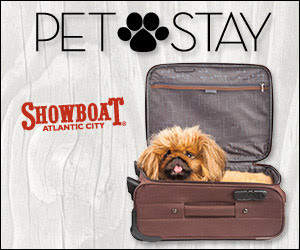 Does your pooch desire to live the lavish celebrity lifestyle of luxurious suites, fine canine cuisine, golden fire-hydrants? If so, there’s no need to beg because Showboat Atlantic City wants them for their exclusive America’s Next Top Dog Model contest. To celebrate the one year anniversary of becoming dog-friendly, Showboat is leaving no doggie house unturned to find a pet that that has the looks and charisma
to be the next face of Pet Stay.

(You must LIKE the page first). On January 31st the submission period ends and fans will get to vote on which dog has the most star power.

On February 13th the voting ends and the top ten dogs with the most votes will be chosen to compete in the Showboat’s ‘Best in Show’ competition. Fans eager to participate are encouraged to upload photos of their dogs wearing cute costumes or engaging in interesting activities. Entries are limitless so owners should feel free to put up several pictures to showcase their dog’s true talent, but all participating dogs must be under 50 pounds to enter. 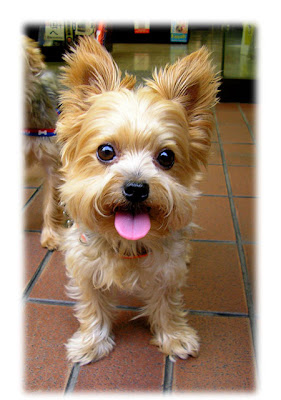 Owners of the dogs selected to be among the six finalists will receive a two night stay at Showboat to compete in the ‘Best in Show’ competition on Saturday, March 3rd, as well as a complimentary breakfast at the Mansion Café and $100 food credit for Scarduzio’s Steak Sushi Lounge. The actual dog chosen as the Next Top Dog Model’s owner will receive a grand prize package that will be sure to make those tails start wagging.

Posted by Miniature Yorkie at 2:34 PM No comments:

LUCY Smallest Working Dog on the Planet - A Yorkie! 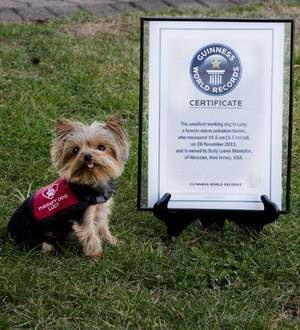 A mini Yorkshire terrier from New Jersey is now in the Guinness Book of World Records.

She was headed for an animal shelter two years ago when a woman brought her into the Paw Dazzle pet boutique in Smithville. This dog was almost HOMELESS! Who could not love that face?? How can people give up their dogs to a shelter?? I think it is THEIR responsibility, to find that dog a new home!

Shop owner Sally Leone Montufar decided to keep her. She tells The Courier-Post of Cherry Hill the Yorkie was lethargic then. But Lucy was brought back to health and has been trained for her therapy work. She visits hospitals, nursing homes and special schools, often wearing dresses and bonnets.

WATCH THE VIDEO OF LUCY!

A Tiger and Her Baby Pigs

Even though this a site for Yorkies - I thought this was too special not to share!

In a zoo in California , a mother tiger gave birth
to a rare set of triplet tiger cubs.
Unfortunately, Due to complications in the pregnancy,
the cubs were born prematurely
and due to their tiny size,
they died shortly after birth. 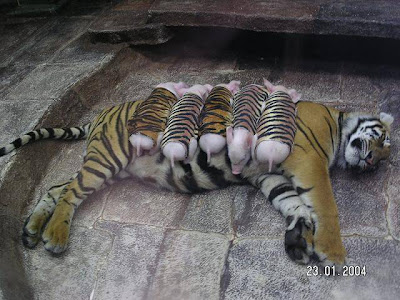 The mother tiger after recovering from the delivery,
suddenly started to decline in health,
Although physically she was fine.
The veterinarians felt that the loss of her litter
had caused the tigress to fall into a depression.
The doctors decided
that if the tigress could surrogate
another mother's cubs,
perhaps she would improve. 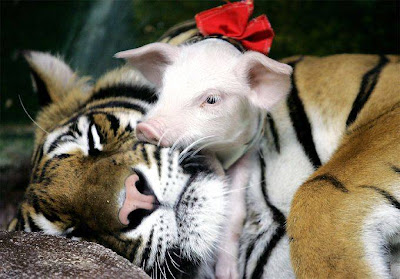 After checking with many other zoos across the country,
the depressing news was that there were no tiger cubs
of the right age to introduce to the mourning mother..
The veterinarians decided to try something
that had never been tried in a zoo environment.
Sometimes a mother of one species
will take on the care of a different species. 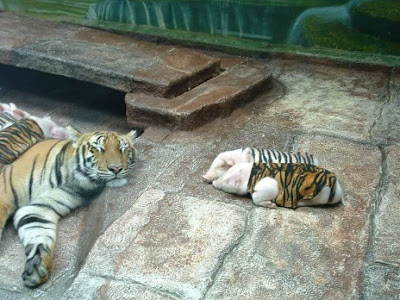 The only orphans' that could be found quickly,
were a litter of weanling pigs.

The zoo keepers and vets
wrapped the piglets in tiger skin
and placed the babies around the mother tiger... 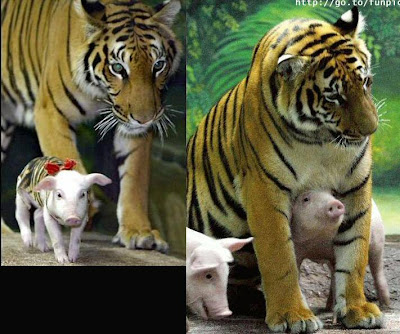 The Tiger took them immediately! And her health improved!
This has been in several zoo's, where a tiger raises piglets.

Watch the video!
Posted by Miniature Yorkie at 10:06 AM 7 comments: 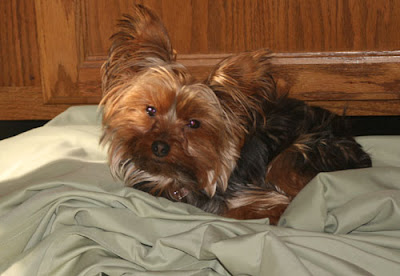 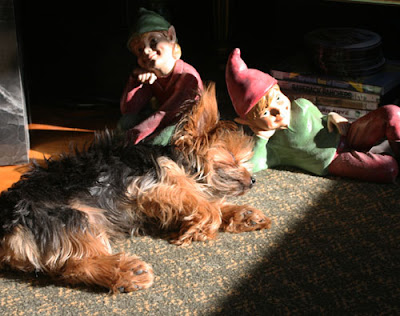 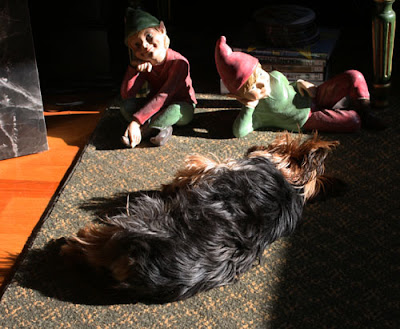 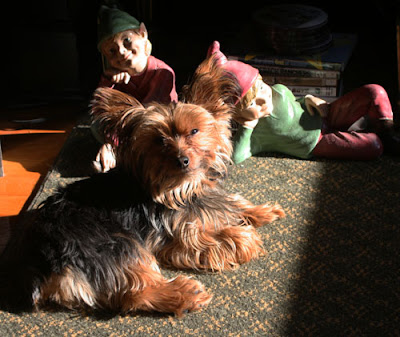 Two of my favorite things in the whole world!
Laying in the sun - and on top of warm laundry, fresh out of the dryer!
Posted by Miniature Yorkie at 10:13 AM 1 comment: