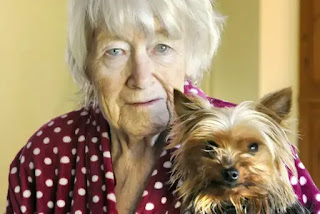 A cowardly burglar had a ‘Lucky’ escape after being scared off by an elderly woman’s ‘hero’ dog.

Widow Janice Snelling, 76, revealed she was ‘terrified’ when a large man broke into her house.
But the intruder bit off more than he could chew when, on entering Janice’s bedroom, he was confronted by ‘ferocious’ pint-sized 10-year-old Yorkshire terrier Lucky, who frightened off the man before he managed to steal anything.Read more at: https://www.portsmouth.co.uk/news/crime/cowardly-burglar-tried-to-target-a-widow-s-home-but-didn-t-expect-to-run-into-lucky-1-8339238

Posted by Miniature Yorkie at 5:27 PM